We're an affiliate. If you use our partner links we may earn a commsission from sales at no extra cost to you. Thank you! Read the full disclosure here.

Sometimes you just need more power. In this quick guide we discuss running two power inverters together for those who need that extra boost.

Connecting Power Inverters for More Wattage – Can It Be Done?

Are you familiar with the way that a power inverter works? Chances are you’ve seen or used them before or even use one. 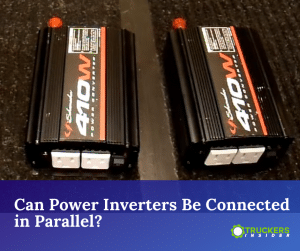 emergency situations. A lot of people from truck drivers, RV’s and first responders use power inverters to supply power for appliances and devices.

Truck drivers specifically use power inverters for appliances like microwaves, hotplates, and mini fridges in order to make life on the road a little more like home.

Although purchasing one can easily be done online, that doesn’t necessarily mean that you would be able to convert everything to AC power. But could you gain a higher wattage output with two inverters instead of one?

Below is a detailed look at making parallel connections with two inverters. And just so you know where to start, a description the way power inverters work, along with their suggested uses, is briefed as well. You’ll be better prepared to convert and make parallel connections when the time calls for it. Read further to find out more!

Can power inverters be connected in parallel?

Yes, but it can be dangerous. You should have some electrical knowledge or access to an expert, basic tools that include a multimeter and ensure that your inverters are built to handle the load.

What is a Power Inverter?

A power inverter plugs into a vehicle’s power source either directly to the battery or through a cigarette lighter port and converts direct current (DC) to alternating current (AC) to supply power to portable devices.

Have you ever seen someone running a generator from their automobile or power home style appliances? They were likely using a power inverter or inverter/generator combination. Inverters have the ability to convert direct current (DC power) to alternating current (AC power). DC power outlets are commonly found in most vehicles.

An inverter can either be hooked into a car’s DC slot, or directly into the car’s battery itself. They vary in power from only 100 watts to over 1000. Most standard models for car batteries are between 400 and 500 watts and car power anything that runs on AC power, so long as it falls within the inverter’s wattage limitations.

Can You Connect Two Power Inverters?

Absolutely! As long as you know what you’re doing beforehand, making a parallel connection is quick and easy. A parallel connection involves the use of two power inverters instead of one. As was described in the beginning, there are plenty of reasons that one would need to do this.

Maybe you’re working on another vehicle, yet don’t have access to a nearby AC outlet to change power tools. Maybe you’re camping with family and friends and need to power a small generator.

Over the road truckers use them to power a wide variety of devices.  Or maybe you just want to know what to do in the event of an emergency situation where the only power source available to you is a car’s battery. They’re also great for charging solar devices of all kinds.

Is a Parallel Connection Feasible?

Not every power inverter is capable of being connected in parallel. Some of them are very small, and better for individual use in the vehicle. When in doubt. Always contact the manufacturer to see if this is feasible or not.

So the answer to the question presented depends on the inverter in the user’s possession. If you don’t own a power inverter and are thinking of getting one, ask before you buy, or read the user manual to see if there are instructions or relevant directions on making parallel connections.

How To Connect Two Power Inverters

When connecting a power inverter for the first time, it’s pertinent that you take your time. You don’t want to make any mistakes when altering the way a converter is used. Be sure that you turn your vehicle off before making any connections to the battery.

As a preemptive measure to avoid breaking your inverters, check the wattage (here’s a guide) of the electrical appliance you want to power with the parallel method, then check the combined total of their wattage.

Make sure that the wattage is slightly greater than the object you’re going to power. For instance, if you have a 700-watt generator, you would want the parallel connection to be greater than 800 or 900 watts. If you’re unsure what the device’s wattage is but have the amp/volts states, simply multiply the amps by the volts. The number you come up with is the total wattage.

Step by Step Guide to Making a Parallel Connection

While this has been repeated, it cannot be stressed enough; The chances of failure during a parallel connection are high when using two inverters made by different brands. Even if the wattages are the same, it’s still a good idea to buy dual inverters from the same manufacturer if you can.

If you’re going to hook them up to a battery, be sure that you see DC input terminals on the inverters. Check for defects in the design, ensuring there are no cuts or breaks in any input wires provided.

Overall, you want to make sure there is no pre existing damage to either the inverter or battery.

Step 2: Connect to a Battery Source

After turning your vehicle’s battery off, take one of the inverters and connect the DC power input terminal to the battery. However, this can sometimes be dependent on the model that you’re using.

Some inverters may not use this method, such as those that connect to the battery with positive and negative power cables. In any case, ensure that the cables you use aren’t too long. Depending on your battery, this might also be a non-issue.

Based on the number of amps that will travel through the wires, you might need a different set than what’s provided by the initial inverters. You can get accurate measurements of this with a multimeter to prevent going over the specified limitations of the current flowing through the input wires.

Besides being called parallel connection, this is also commonly referred to as a master/slave technique. Connect the second inverter to the first via the positive input. This means that the “slaves” input should be positive (a plus) and hooked to its master’s positive.

The same should be done to the negative by attaching the slave’s minus to that of the first inverter. As food for thought, this is a very basic master/slave/parallel connection. Some connections can be much more complicated and work, just as long as the connections fall underneath the power source’s limitations.

Step 4: Connect to an Extension Cable or Circuit Breaker

The next step is to connect the first inverter you worked with (the master inverter) to an outgoing source. There are typically two sources for one to use. The first is an extension cable to which you would plug the male end to the master inverter.

Additionally, try to avoid hooking up too many extension cables in the process as a “daisy chain,” which creates a fire hazard. Above all, check that the extension cable can handle the current being passed through it. This can usually be found on the cord’s label.

Connecting your parallel setup to a breaker can also be done, provided you the correct wires to do it. Most Sine Wave converters won’t be able to do this, However, TSWs or True Sine Wave inverters can, though doing so is a lot more complicated than using a standard AC cable.

To be sure that you’ve hooked up everything in an appropriate manner, check that all you’ve made all the proper connections before turning on your power source. All wires should be tightly plugged into their female outlets.

To give it a test run with an extension cable consider using an appliance that’s significantly smaller in wattage than what you’re trying to power. If that works as expected, then you can finally plug in your main device.

To prevent shortages and damage, never plug anything into the extension cord that goes over the combined wattage of both power inverters.

Step 6: Take Note of Your Setup

It’s very easy to forget how a parallel setup works. For reference, you should take note of what you’ve done if planning on making such a connection in the future. It’ll be easier for you to have everything plugged up and ready to go.

Never store your power inverters in a place with lots of moisture. Furthermore, consider opening up the inverters periodically to check for any burn marks around the circuit board’s transistors and input terminals.

Of course, always discard the inverter if you see any damages to these areas.

Can power inverters be connected in parallel? Yes, you can power your devices with the parallel method.

You’ll want to pay close attention to what you’re doing and not get in a big hurry.Make sure that to be certain that you’re doing everything correctly when it comes to handling electric currents and follow the manufacturers recommendations.

Not all of them are meant to be connected while others are more than capable and can handle the load.